F is for FANNIE BAY

For most tourists to Darwin, the near-city suburb of Fannie Bay is visited primarily for its sea views and sunsets, and perhaps a visit to the local cafe where you can combine both.

However behind the suburban streets lies a wealth of aviation history –perhaps rather more than might be found in many places, or perhaps I’m being parochial. No doubt its claims to fame arise largely from its geographic location at the top of the country and hence the first landfall for many.

So what’s my evidence for saying Fannie Bay is so important to flying obsessives? I think even those indifferent to aviation will recognise many of these names with links to Darwin. 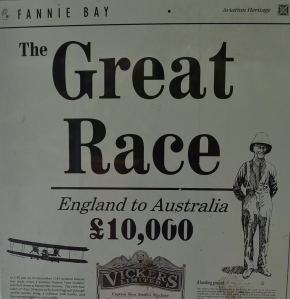 On 10 December 1919, pilots Ross Smith his brother Keith, and their mechanics, Sergeants Wally Shiers and Jim Bennett, won the £10,000 prize money for The Great Race, being the first to fly from England to Australia, taking 28 days. This amount, now worth about $500,000, must have been an amazing bonus for the men on top of their record achievement and coming at the end of World War I. They landed on the Parap Police Paddock beside the Fannie Bay Gaol, a site now marked only as a vacant block with a plaque and a sign, tucked among suburban houses. 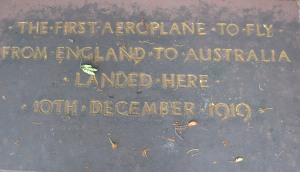 A more impressive memorial, erected by the Commonwealth, stands near the waterfront at Fannie Bay and the nearby Aviators’ Park memorialises Darwin’s aviation history. In a quirk of family history my husband’s great uncle, Colonel WEH Cass, was the chairman of the reception committee in Melbourne to welcome the aviators. Ross Smith was a hero as well as an expert pilot, being awarded the Military Cross twice and the Distinguished Flying Cross three times. He and his brother were both knighted after their international flying success.

Ross Smith and Jim Bennett were killed in an aviation accident in England in 1922.

This flight was just one of many to make the link between aviation history and Darwin.

On 22 February 1927, another famous Aussie, and Queenslander, Charles Kingsford-Smith, along with Charles Ulm, landed here during a round Australia flight.

In 1928, Bert Hinkler, from Bundaberg in Queensland, broke the Smiths’ record for a flight from England to Australia. However the record was beaten only a few years later by Kingsford-Smith and Ulm who shaved a further 10 days off the time.

In January 1930, Francis Chichester also attempted to beat Hinkler’s record and landed in Darwin – I found this interesting given his later sailing exploits. Chichester was British-born but had lived in New Zealand from the age of 18.

A few months later the women started to make their mark, with English aviator Amy Johnson landing in Darwin on 24 May 1930.

Modest Australian aviator, Lores Bonney, set forth on her solo flight from Australia to England on 13 April 1933. She was a force in Australian women’s aviation for decades to come, making a number of solo flights which created records. You can read more about her here, but how disappointing that she does not have an entry in the Australian Dictionary of Biography…. I feel quite indignant! She is also the subject of a book called Pioneer Aviator by Terry Gwynn-Jones.

On 28 June 1937, Amelia Earhart also stopped in Darwin on her attempt to fly around the world. A few days later she and her plane would disappear in the Pacific after leaving Lae in Papua New Guinea.

On 19 February 1942, Darwin would make both aviation and military history for being the first place in Australia to be bombed by the Japanese. During the bombing raid, the Air Force base at Parap (adjacent to Fannie Bay) was also bombed, damaging and destroying many of the Wirraways and other aircraft stationed there before they could get airborne.

Throughout the war, the runway ran through the centre of Parap towards Fannie Bay, on a street now known as Ross Smith Avenue. Taxiways ran along Philip St but all that remains of this history are plaques in the footpaths.
It’s probably fair to include the massive airlift of residents after the devastation of Cyclone Tracy (Christmas Day 1974) in Darwin’s historic aviation events. Some residents became refugees in their own country for the second time in their lives, once after the war-time bombing and once after Tracy. Many lost precious family memorabilia including childhood photos and inherited items. The Museum and Art Gallery of the Northern Territory has excellent displays on the impact of Tracy, which hit Fannie Bay hard, but not to the extent of the northern suburbs which were nearly destroyed.

Darwin’s pivotal role in the country’s airborne defence is emphasised with biennial training for air forces in the region. Known as Operation Pitch Black, , this generates constant sound over the skies of Darwin. Although the airport is no longer at Fannie Bay/Parap, their proximity to one end of the runway (the other end is called Amy Johnson Drive) means that there’s plenty of opportunity to watch the Top Guns at work.

Why visit: to celebrate the remarkable achievements of early aviation across vast distances. Throw in a sunset, a drink and a sea view and you’ve got it made!

FYI: There are a couple of maps on my A to Z planning post which will help you to pinpoint where today’s post is situated.

Flaming*: another Aussie swear word but not heard so often these days.

Flicks*: a word much in use in my childhood for the movies but now overtaken by “cinema”.

Flat as a tack: feeling a bit deflated personally or alternatively the tyre’s flat as a tack.

Flat out like a lizard drinking: busy as anything, too much to do.

Floozie: “No better than she ought to be”, a woman of low morals, a definite insult.

Fag: used for a cigarette (I’m going to have a fag) but also pejoratively for homosexual men.

Freshie: a freshwater crocodile –less threatening than the saltwater version but still wise to steer clear. Some billabongs in the Top End are cleared for salties (saltwater) crocs though there are known to be freshies in them. Definitely a word to have in your Top End vocabulary.

Fella: person or man eg blackfella, whitefella or “he’s a wild fella that one”.

20 thoughts on “F is for Fannie Bay Flying”