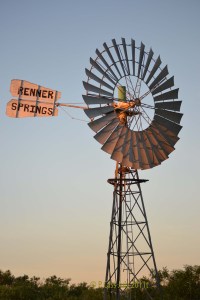 R is for RENNER SPRINGS

One of our regular overnight stops on the long drive to Brisbane is Renner Springs, especially when we set out from here later than intended. On the face of it, Renner Springs appears to be a pretty boring road stop with not much to recommend it but pop over to my post about the surprising things you might see if you wander around a bit, or if you’re up early.

R is for ROAMING

Since we’re on the road I thought today we’d have a chilled-out kind of R day and check out some of the weird and wonderful signs we’ve seen on those long-distance drives.

Just to set the scene I want to show you an image to capture just how vast our distances are as I’ve mentioned previously. Darwin is about equidistant to Brisbane on the east coast or Adelaide in the south, roughly 3300kms. I took this photo a few years ago on the coast of Ireland. Moscow anyone?

The roads of the north are regularly sprinkled with road trains. They’re BIG and very daunting. With the prime mover and three or four trailers they can be up to 50 metres in length and be travelling at around 100kph.  Fortunately the drivers are generally responsible but it can take a long time to pass one of these even at the legal open-road limit of 130kph. So this is how to deal with them. I always have my heart in my mouth when I have to overtake one. 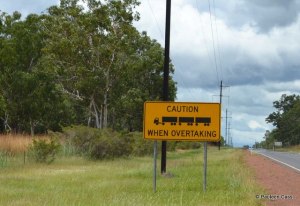 There are crocodile warning signs on most of the waterways in the Top End -with good reason -this is just one example. Do take them seriously…this is not a “beat up”: people and animals can and do get taken by crocs…not many live to tell the tale.

And if anyone can explain what a rhinoceros has to do with the Northern Territory I’d be happy to learn. We saw this on the way to Alice Springs one year.

This edited road sign on a Queensland road was a humorous warning of the hazards of cattle on the road.

When we visited Tasmania a few years back, during poppy season, we were much taken with this signage on the fences. (so okay this is in the south, but how could I resist)

Ripper beauty: Excellent, great idea etc. Or just “ripper” on its own.

Ratbag: another insult, generally mild and may even be somewhat admiring when it’s implying cheeky and the like.

Ring-in: someone or something that doesn’t belong, an extra on an outing. I’ve brought along a ring-in, hope that’s okay.

Ringer:  has two uses: (1) as the shearer of sheep with the highest tally (of sheep shorn) in a certain time (2) stockman droving cattle; and sometimes (3) as in dead ringer (below)

Reckon: estimate of cost or an opinion. I reckon he’s bitten off more than he can chew this time OR I reckon it would be worth a hundred bucks.

Rip off: when the cost of the item is more than it’s worth.

Ranch: Australians do NOT have ranches!!!

12 thoughts on “R is for roaming the roadways”